As I’m discovering, designing, developing & deploying websites, I’m sharing what I’ve learned (usually the hard way) in this journal. I've learned so much through the amazing open source community, now it's time to give back!

In 2012 I attended WCSD (WordCamp San Diego) and had an amazing experience. After I left that event, I knew I would be attending every future one I could realistically make it to. I made a lot of great contacts and learned some invaluable information that changed a lot of my work process. Looking back at the past year, I cannot believe how far I’ve come as a developer.

The only downside to my 2012 experience (which is completely my fault) was that I went into the weekend a little unprepared. At the time my website was offline, and had been for about a year leading up to that point. I also came without business cards, as the ones I did have, had outdated information and were completely irrelevant. 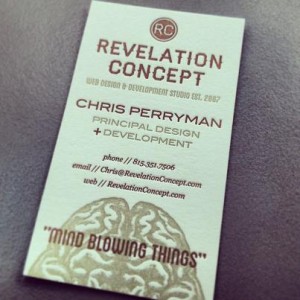 Now we are quickly approaching WCSD 2013 registration and guess what…I have no website and the same old business cards. Wow. This was a huge wakeup call for me, I had procrastinated a whole year…I won’t make excuses, although I have many. The point is I was about to go back into WordCamp, the biggest networking event in my year, completely unprepared!

So I quickly set myself an utterly unrealistic deadline to have my site designed, developed and ready for a decent soft-launch by the Wednesday before camp. I actually did pull the whole thing off in a little less than two months while maintaing a completely client dedicated 9-5pm. But, “oh, wait”…I HAVE NO BUSINESS CARDS. I realized this about two weeks before WCSD.

I really, really, really wanted letterpressed cards. I had since the day I decided I hated my old ones. I started doing last minute research on pricing and turnaround, the result of which were expensive and long (upwards of $400 for 100 cards and 3-5 week turnaround). I decided to ask the “locals” if they knew of any shops in San Diego that offered quality letterpressing at decent prices. A buddy of mine (maybe too soon to call him a buddy, but I will make him be my friend) Greg Gibson, referred me to Tim at Quality Letterpress…and I’m so glad he did!

Tim is amazing. He’s personable and genuine. He gave me the best pricing I’d gotten…less than all the other quotes I had received, for more than twice the card count and with a turnaround of ONE WEEK. Don’t go knocking down his door for a one week turnaround, I got him at a good time…but the point is he is awesome and saved me from my own procrastination. The finished product is even better than I envisioned and I just had to dedicate a post to him. Hopefully someone stumbles across this and he gets some good clients.

best websites of the world